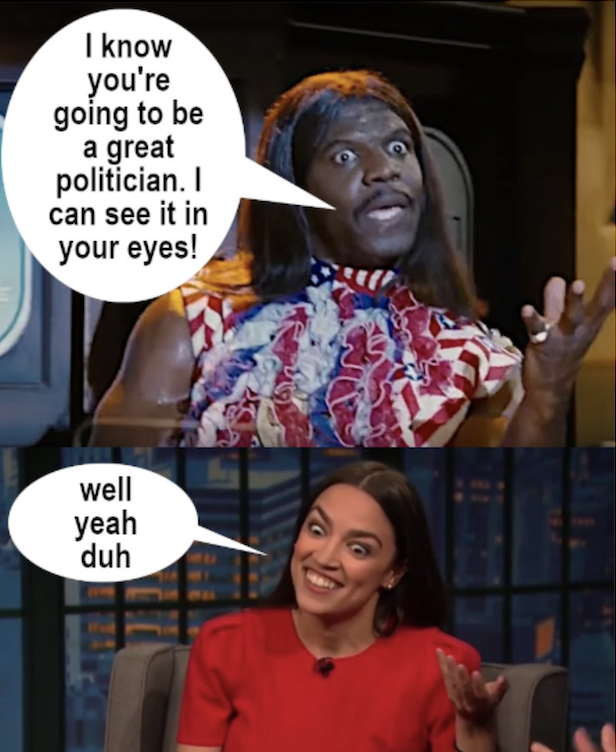 STUPID BIMBO!
‘THE STATE OF TEXAS’ SUB CORPORATION OF DC WHICH IS MILITARILY OCCUPYING THE Republic of Texas FOR 155 YEARS AND COUNTING SHUT DOWN COAL/GAS FIRED PLANTS, INSTALLED WIND GENERATORS WHICH FROZE AND SOLAR FARMS WITH PANELS COVERED IN A FOOT OF SNOW PLUS ABOUT HALF OF MEXICO’S DIRT POOR STREET CRIMINAL CLASS LIVING IN TEXAS OVER WORKING THE GRID (THANK YOU UNCLE SUGAR).
THIS IS WHAT HAPPENS WHEN YOU GO GREEN DUMB BIMBO!
I BET THE BOYS ALWAY SAY YES WHEN SHE ASK THEM IF THEY WILL ALL STILL REPECT HER IN THE MORNING!
You don’t really think the actors in the DC Soap really take themselves serious do you?
The Ole Dog!
————————————-
Rep. Alexandria Ocasio-Cortez (D-New York) has blasted Texas Governor Greg Abbott and the state’s infrastructure planning, claiming her Green New Deal would better prepare areas for extreme weather conditions.

“The infrastructure failures in Texas are quite literally what happens when you *don’t* pursue a Green New Deal,” Ocasio-Cortez tweeted on Wednesday.

The message appeared to be in response to Abbott criticizing a potential Green New Deal due to many renewable energy sources like solar panels and wind turbines failing in the state’s historically cold weather. In an appearance on Fox News on Tuesday evening, Abbott said not being able to rely on these energy sources in extreme weather is part of the reason for rolling power outages in his state.

“This shows how the Green New Deal would be a deadly deal for the United States of America. Texas is blessed with multiple sources of energy, such as natural gas and nuclear, as well as solar and wind,” he said. “Our wind and our solar got shut down, and they were collectively more than ten percent of our power grid. And that thrust Texas into this situation.”

Ocasio-Cortez has since expanded on her criticism of Texas and its governor.

“So many Texans are in desperate conditions without heat, water, and little relief. Gov. Abbott needs to get off TV pointing fingers & start helping people,” the congresswoman tweeted. “After that, he needs to read a book on his own state’s energy supply. I’ll be prepping TX relief emails if he needs help.”