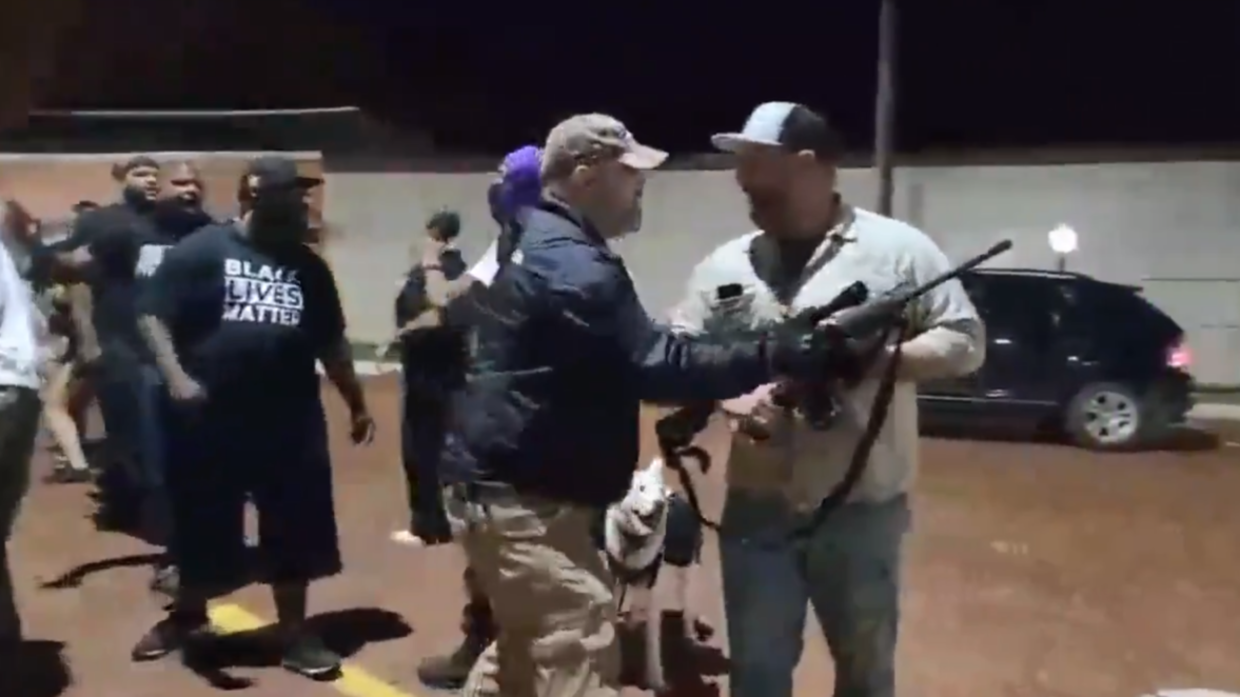 Texas needs Ole Time Texican Peace Officers, not federalized cops who do not understand the Laws of God, or God’s laws, which over rule any of mans rules.

Any ass hole shooting a man in the back for walking away after a fight in which no one was seriously injured is a fool, and a bloodthirsty ass hole and NEEDS to not only be charged with murder, but damn well convicted and hanged by the damn neck until dead.
God does not care if a goon has a badge when he murderes another human in cold blood.
the corrupt  USA man’s Corporation courts might clear his ass, but the Supreme Court on the other side of the vail operated on God’s law, not baby raper politicians rules!

Besides the cop being too dumb to ask bystanders what the hell went on before he declares himself god and all around him should shit their pants in fright at his presence should not be on the street with a loaded weapon.

All three sides, the cops, the BLM Soros paid anti-American terrorist, and the idiot “militias” helping stir this shit up are fools, and helping make a shit hole of America.

Texas Rangers have charged Wolfe City police officer Shaun Lucas with murder for the fatal shooting of an unarmed black man. A vigil was held on Monday night, and there were violent clashes between BLM activists and locals.

Jonathan Price, 31, was tasered and then shot to death on Saturday while trying to break up an altercation at a gas station in Wolfe City, 80 miles northeast of Dallas.

Officer Lucas responded to a call about a fight in progress when he encountered Price, who reportedly resisted arrest in a non-threatening way. As Price walked away from Lucas, the officer shot him with his Taser before opening fire with his handgun.

Price was rushed to hospital for emergency treatment, where he later died. He was found to have been unarmed at the time of his death. Lucas has been released on $1 million bond.

A vigil was held overnight by Black Lives Matter protesters demanding justice for the slain man. When the group encountered a heavily armed group of apparent Trump supporters, all hell broke loose as eyewitness footage from the scene shows.