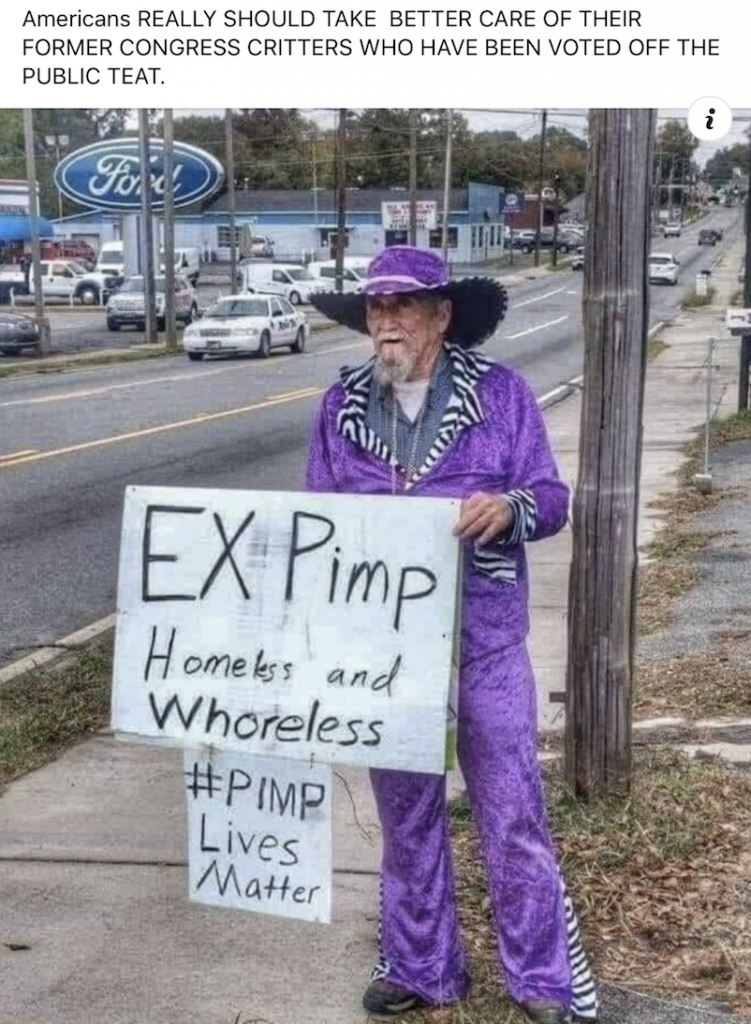 This is embarrassing, now look!

Former congress critters on the street, no voters to Pimp anymore!

What the HELL do you EXPECT them to do????

I recall  when the Ole Dog! was a young Pup full of Piss & Vinegar,.

Was a Career Councilor in my Battalion, among the Many covers I wore covering  my regulation shaved face  & regulation  hair cut head.

Had many a young Bee come to me, “Petty Officer Carleton,  the Navy refuses to give me what they promised me, what my Recruiter said blaw-blaw-blaw when I signed the contract!!!!

I’d give em one of those real, not feigned belly laughs, reply:

AND YOU DAMN WELL BELIEVED THEM!!!

Below is a poem written in WW 1 which reminds me of when the stranger came home from war, replacing the Husband my wife sent off crying, pregnant, caring for a three year old, to war.

Her Husband never came home from that war, I was sent in his place, my children’s  father, the same.

I have done the best I can to spoil her rottener than her father gave her to me, ( who tried to make up to her  for her father going off to fight the Japanese and never coming home) as a small gift, cry for forgiveness what I put her and our family through.

They buried  her father, her last remaining parent, before the Red Cross found me in that damed desert sand box.

Humanity has to stop this shit, we pass the trauma from generation to generation.

So what they delivered, is not what they promised you.

Get over and chose your leaders and form of “government” more wisely next time!

‘SUICIDE IN THE TRENCHES”

I knew a simple soldier boy
Who grinned at life in empty joy,
Slept soundly through the lonesome dark,
And whistled early with the lark.

In winter trenches, cowed and glum,
With crumps and lice and lack of rum,
He put a bullet through his brain.
No one spoke of him again.

You smug-faced crowds with kindling eye
Who cheer when soldier lads march by,
Sneak home and pray you’ll never know
The hell where youth and laughter go