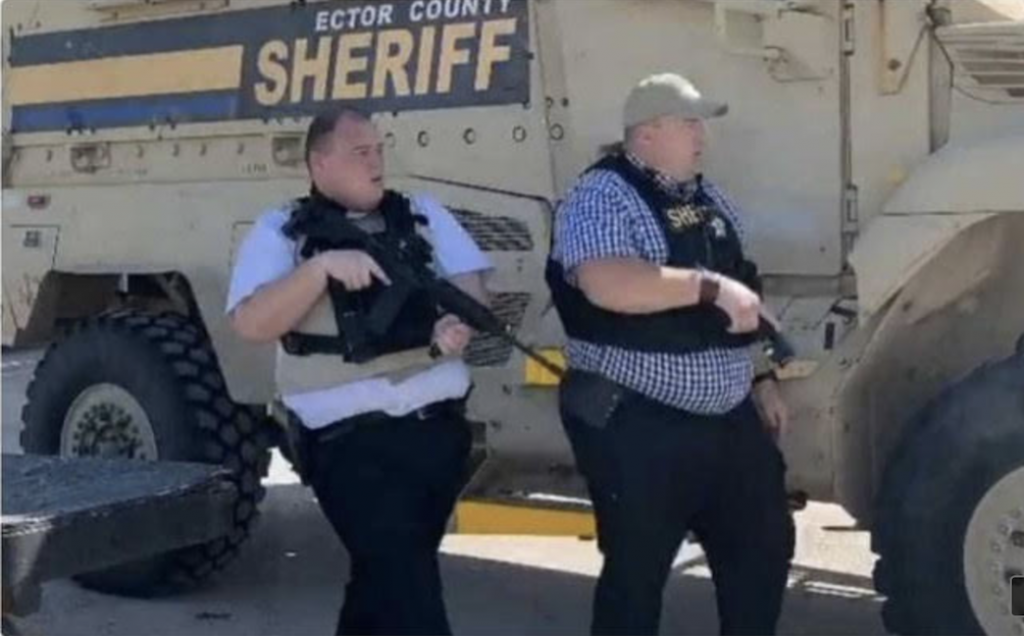 No, that was another Texas Sheriff’s “swat” team after peaceful protesters in another country.

Man has rules, codes and Statures, none  of which over ride God’s/nature’s Laws.

In other words, any ass hole “government” goon says his rules allow him to violate the RIGHTS God Gave you, is an evil piece of dark side pig fornicating shit.

The Republic of Texas has been occupied in a criminal act by the USA/DC International for profit Corporation for 155 LONG, OPPRESSED years and counting!

They have made it a yankee’s wet dream.

In other words a oppressive third world shit hole.

About time to kick the invading scum from all directions out, and clean Texas up wouldn’t you say Texicans?

Lufkin, TX — A couple’s verbal dispute over a parking space turned into a nightmare after a call was made to 911 to settle it. When police showed up, the man involved in the dispute, Mark Anthony Smith, 48, was savagely beaten by three deputies who all used their rifles to inflict serious injury. He was then falsely charged and thrown in a cage.

The incident unfolded in April but video of it was only just released. The video reportedly saved Smith from spending decades in prison after it showed that cops were the aggressors and Smith was an innocent victim. Despite the charges being dropped against Smith, the apparently corrupt sheriff, Greg Sanches, is standing by his officers and justifying their near-deadly assault.

According to Dawn Thompson, who called police on April 7, the call was made because Smith apparently wouldn’t move his truck. That was all. The sheriff disagreed and claims that Thompson was in distress which is why officers showed up with AR-15s drawn on Smith. However, this is a detail Thompson disputes and says the 911 call — she now regrets making — made no mention of distress and was all about moving a truck

Greg you are about one lying ass crooked cheating ass sherif. I made the 911 call never once said I was in fear just wanted him to move his truck. I have listened to the 911 call and made it clear I was not in fear for my life. Your officers tried a couple of times to get me to say I was when they called me asking for access code to his video system. You are flat out lying to the people of Angelina county. Bring the 911 tape and your copy of the video to television station And we will let them play both there exactly the same. I was sitting in the car with my window down and yet no one ever told him to get down. It’s on 911 call as well. As well as him asking you what y’all wanted. He never knew I called 911 as well. So Mr. Sanchez lets just go ahead and bring all this to the KTRE NEWS STATION . People really need to think before calling the sheriffs department for something cause it happens a lot and people don’t really get to see the truth. “ Braking his ribs after he’s handcuffed and Unconscious “ it’s nice to see you support your “team”.