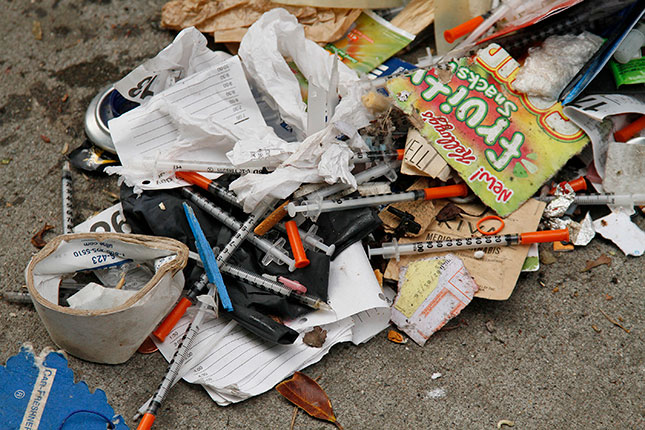 They doing a pretty good job of turning San Antonio into a shit hole where natives are not safe.

Everyone’s on drugs here . . . and stealing,” an ex-felon named Shaku explains as he rips open a blue Popsicle wrapper with his teeth. Shaku is standing in an encampment of tents, trash, and bicycles, across from San Francisco’s Glide Memorial Church. Another encampment-dweller lights a green crack pipe and passes it around. A few paces down the street, a gaunt man swipes a credit card through a series of parking meters to see if it has been reported stolen yet.

For the last three decades, San Francisco has conducted a real-life experiment in what happens when a society stops enforcing bourgeois norms of behavior. The city has done so in the name of compassion toward the homeless. The results have been the opposite: street squalor and misery have increased, even as government expenditures have ballooned. Yet the principles that have guided the city’s homelessness policy remain inviolate: homelessness is a housing problem; it is involuntary; and its persistence is the result of inadequate public spending. These propositions are readily disproved by talking to people living on the streets.

Shaku’s assessment of drug use among the homeless is widely shared. Asked if she does drugs, a formerly homeless woman, just placed in a city-subsidized single-room-occupancy (SRO) hotel, responds incredulously: “Is that a trick question?” A 33-year-old woman from Alabama, who now lives in a tent in an industrial area outside downtown, says: “Everyone out here has done something—drugs, you name it.” On Sutter Avenue, a wizened 50-year-old named Jeff slumps over his coffee cup at 7:30 AM, one hand holding a sweet roll, the other playing with his beard. A half-eaten muffin sits next to him on a filthy blanket. “I use drugs, alcohol, all of it,” he tells me, his eyes closed, as a pair of smiling German tourists deposit a peach on his blanket. Last night it was speed, he says, which has left him just a “little bit high” this morning. “The whole Tenderloin is for drugs,” Jeff observes, before nodding off again.

An inadequate supply of affordable housing is not the first thing that comes to mind when conversing with San Francisco’s street denizens. Their behavioral problems—above all, addiction and mental illness—are too obvious. Forty-two percent of respondents in the city’s 2019 street poll of the homeless reported chronic drug or alcohol use; the actual percentage is likely higher. The city relentlessly sends the message that drug use is not only acceptable but fully expected. Users dig for veins in plain view on the sidewalk; health authorities distribute more than 4.5 million syringes a year, along with Vitamin C to dissolve heroin and crack, alcohol swabs, and instructions on how to best tie one’s arm for a “hit.” Needle disposal boxes have been erected outside the city’s public toilets, signaling to children that drug use is a normal part of adult life. Only 60 percent of the city’s free needles get returned; many of the rest litter the sidewalks and streets or are flushed down toilets.