i climbed from the still steaming slime screaming i AM ALIVE,
life was in me from the moment into the mist i did dive,

Waiting not for an invitation to life,
i burst upon the scene full of energy for strife,

A kingdom i, from this world did demand,
Determined to not retreat, fall back, but make a stand,

Every knee to lower on dirt or stone,
While i the King, the conquer, the emperor, stood alone,

Every head to bow, every set of lips to kiss my hand,
Every child, woman or man,

Life after life, i fought, killed and won,
Lands, they stretched from the rising to the setting of the sun,

Each mans future and life depended on me,
They all waited breathlessly to see,

if in peace i would pass,
Or slaughter them mercilessly, in mass,

The weak trembled, the the afraid whimpered and moaned,
At each footfall of my booted feet, afraid of my men domed,

With helmets of bronze and steel, with gold and silver inlay,
Encrusted with jeweled amulets to keep their own deaths at bay,

The people scurried about their meaningless labor ridden lives,
Drowning their frustrations and fears in vermin filled dives,

They constantly demanded this and that,
From the king in the golden, but thorny hat,

They had to be clothed and fed,
They each had to be watched after, till they were dead,

Milling about in clueless herds.
Screaming things, of which they did not understand the meaning of the words,

Running to and fro, back and forth, in and out, up and down,
Each and every one of them a cowardly, drama queen clown,

i still scream to the winds, i AM ALIVE, each and every day,
But i wish the sheep could and would have their say,

Out of earshot of me and mine,
let them have independence, to grow like a vine.

Out in the clean air with the sunshine and rain,
Accepting with growth, must also come pain,

On being a king again, i will pass,
And the empire builders, can kiss my eternal ass!

1 And Elisha the prophet called one of the children of the prophets, and said unto him, Gird up thy loins, and take this box of oil in thine hand, and go to Ramothgilead:

2 And when thou comest thither, look out there Jehu the son of Jehoshaphat the son of Nimshi, and go in, and make him arise up from among his brethren, and carry him to an inner chamber;

3 Then take the box of oil, and pour it on his head, and say, Thus saith the LORD, I have anointed thee king over Israel. Then open the door, and flee, and tarry not.

6 And he arose, and went into the house; and he poured the oil on his head, and said unto him, Thus saith the LORD God of Israel, I have anointed thee king over the people of the LORD, even over Israel.

7 And thou shalt smite the house of Ahab thy master, that I may avenge the blood of my servants the prophets, and the blood of all the servants of the LORD, at the hand of Jezebel.

8 For the whole house of Ahab shall perish: and I will cut off from Ahab him that pisseth against the wall, and him that is shut up and left in Israel:

10 And the dogs shall eat Jezebel in the portion of Jezreel, and there shall be none to bury her. And he opened the door, and fled.

11 Then Jehu came forth to the servants of his lord: and one said unto him, Is all well? wherefore came this mad fellow to thee? And he said unto them, Ye know the man, and his communication.

12 And they said, It is false; tell us now. And he said, Thus and thus spake he to me, saying, Thus saith the LORD, I have anointed thee king over Israel.

13 Then they hasted, and took every man his garment, and put it under him on the top of the stairs, and blew with trumpets, saying, Jehu is king.

14 So Jehu the son of Jehoshaphat the son of Nimshi conspired against Joram. (Now Joram had kept Ramothgilead, he and all Israel, because of Hazael king of Syria.

15 But king Joram was returned to be healed in Jezreel of the wounds which the Syrians had given him, when he fought with Hazael king of Syria.) And Jehu said, If it be your minds, then let none go forth nor escape out of the city to go to tell it in Jezreel.

16 So Jehu rode in a chariot, and went to Jezreel; for Joram lay there. And Ahaziah king of Judah was come down to see Joram.

17 And there stood a watchman on the tower in Jezreel, and he spied the company of Jehu as he came, and said, I see a company. And Joram said, Take an horseman, and send to meet them, and let him say, Is it peace?

18 So there went one on horseback to meet him, and said, Thus saith the king, Is it peace? And Jehu said, What hast thou to do with peace? turn thee behind me. And the watchman told, saying, The messenger came to them, but he cometh not again.

19 Then he sent out a second on horseback, which came to them, and said, Thus saith the king, Is itpeace? And Jehu answered, What hast thou to do with peace? turn thee behind me.

20 And the watchman told, saying, He came even unto them, and cometh not again: and the driving islike the driving of Jehu the son of Nimshi; for he driveth furiously.

21 And Joram said, Make ready. And his chariot was made ready. And Joram king of Israel and Ahaziah king of Judah went out, each in his chariot, and they went out against Jehu, and met him in the portion of Naboth the Jezreelite.

22 And it came to pass, when Joram saw Jehu, that he said, Is it peace, Jehu? And he answered, What peace, so long as the whoredoms of thy mother Jezebel and her witchcrafts are so many?

23 And Joram turned his hands, and fled, and said to Ahaziah, There is treachery, O Ahaziah.

24 And Jehu drew a bow with his full strength, and smote Jehoram between his arms, and the arrow went out at his heart, and he sunk down in his chariot.

25 Then said Jehu to Bidkar his captain, Take up, and cast him in the portion of the field of Naboth the Jezreelite: for remember how that, when I and thou rode together after Ahab his father, the LORD laid this burden upon him;

27 But when Ahaziah the king of Judah saw this, he fled by the way of the garden house. And Jehu followed after him, and said, Smite him also in the chariot. And they did so at the going up to Gur, which is by Ibleam. And he fled to Megiddo, and died there.

28 And his servants carried him in a chariot to Jerusalem, and buried him in his sepulchre with his fathers in the city of David.

29 And in the eleventh year of Joram the son of Ahab began Ahaziah to reign over Judah.

30 And when Jehu was come to Jezreel, Jezebel heard of it; and she painted her face, and tired her head, and looked out at a window.

31 And as Jehu entered in at the gate, she said, Had Zimri peace, who slew his master?

32 And he lifted up his face to the window, and said, Who is on my side? who? And there looked out to him two or three eunuchs.

33 And he said, Throw her down. So they threw her down: and some of her blood was sprinkled on the wall, and on the horses: and he trode her under foot.

34 And when he was come in, he did eat and drink, and said, Go, see now this cursed woman, and bury her: for she is a king’s daughter.

35 And they went to bury her: but they found no more of her than the skull, and the feet, and the palms of her hands.

36 Wherefore they came again, and told him. And he said, This is the word of the LORD, which he spake by his servant Elijah the Tishbite, saying, In the portion of Jezreel shall dogs eat the flesh of Jezebel:

37 And the carcase of Jezebel shall be as dung upon the face of the field in the portion of Jezreel; sothat they shall not say, This is Jezebel.2nt Kings, Chapter 9 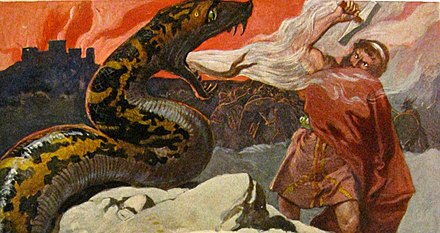 ‘The Rainbow Bridge to Valhalla’

Then a new world from the old will be born from the Ragnarok’s trauma-
After ages, Thor will be once again with honor, be allowed to cross the Rainbow bridge to Valhalla!